Sorrell Admits 2017 'Not Pretty' for WPP

WPP has reported a 2.9% fall in like-for-like annual revenue in its data investment management (DIM) division Kantar, to £2.69bn. While WPP's reported group revenue rose 6.1% to £15.3bn, on like-for-like terms it fell 0.3%, and CEO Sir Martin Sorrell says it had not been a 'pretty year' for the business. 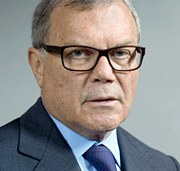 In the DIM division, Kantar Worldpanel and Lightspeed performed 'strongly' in terms of what were previously called net sales - WPP is now referring to these as 'like-for-like revenue less pass-through costs'. Kantar Insights, Kantar Health and Kantar Public were 'less robust'. Geographically, the division experienced growth in the UK and Latin America, with North America and Asia Pacific described as 'particularly difficult'.

Sorrell (pictured) said 2017 had not been 'a pretty year' for the group, with flat like-for-like, top-line growth, and operating margins and operating profits also flat, or up marginally. He blamed this on 'short-term focus of zero-based budgeters, activist investors and private equity', as opposed to any 'long-term disruption' from tech groups such as Google and Facebook.

In a statement, Sorrell said WPP is now upping the pace of its development from a group of individual companies to a 'cohesive global team'. Future focus will be on simplifying structure; stronger client co-ordination across the group; the development of cross-group capabilities in areas such as digital marketing, digital production, eCommerce and shopper marketing; and the further sharing of functions, systems and platforms. In addition, WPP will be developing a senior executive incentive plan which aligns the leadership team more closely to group performance. Signing off, Sorrell added: 'We start this new phase of our journey from a position of market leadership, and with total confidence in the enduring value of what we offer our clients. We will report at every opportunity on our progress'.

In November, Kantar was accused of holding back payments to suppliers, in a bid to artificially boost its balance sheet in the fourth quarter. Recent reports suggest the division is taking more than three months to settle some 30-day invoices, despite WPP being a member of the government's Prompt Payment Code, which requires that fair and reasonable payment terms are agreed with suppliers, and then adhered to.