Chris Havemann, the co-founder and former CEO of Research Now, has joined mobile research tech firm RealityMine as its new Chief Exec. The firm has also received a 'significant' follow on investment from Kennet Partners and other shareholders. 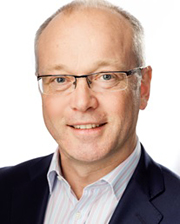 With UK offices in Manchester and London, and a base in Sydney, Australia, RealityMine provides individual level mobile usage data via the RealityMeter data collection tool. Earlier this month, it introduced a product called RealLife Profiles, which provides a daily summary of passively collected data on individual panellists. The new investment, which has been led by Kennet Partners (leaders of a $17.25m round in 2015) will be used to accelerate product development and for further geographical expansion.

Havemann (pictured) joins after a career which has included co-founding online panel specialist Research Now (now Research Now SSI), and later selling the business to online survey community e-Rewards for £85.1m. After nearly two years as President & CEO of the latter, he became CEO of tradesman recommendation service Rated People, where he worked until 2015. He currently serves as a Non-Executive Director on the Board of home emergency service business HomeServe and has been a RealityMine Board member since 2016, latterly serving as company Chairman.

He takes over from former CEO and co-founder Garry Partingdon, who left the business last year to focus on out-of-home ad platform Bodooh, while remaining a RealityMine shareholder. Kennet MD Hillel Zidel comments: 'Chris grew Research Now over eleven years to more than $200m in revenue to become global leader in the online research panel category, and he led the acquisitions of Peanut Labs and Conversition, pioneers in social media research. We are very excited that he will be working in this capacity at RealityMine as behavioural data and passive metering continue to emerge as the next research innovation to change the market research industry'.