The Board of marcoms giant WPP has hired an independent lawyer to investigate media claims of 'personal misconduct' against its founder and CEO Sir Martin Sorrell. In a statement, Sorrell said he rejects the allegations 'unreservedly'. 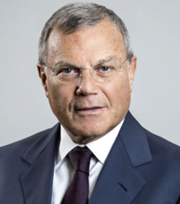 Yesterday, The Wall Street Journal posted an article which indicated that an investigation is looking into possible misuse of company assets by Sorrell (pictured), along with charges of improper personal conduct. No further information was provided, but WPP has since said that the allegations do not involve amounts which are material to the Group.

In response to the claims Sorrell, who is currently the highest paid exec in the UK's list of FTSE 100 companies, confirmed: 'Reports in the media have stated that WPP is investigating an allegation of financial impropriety by me, specifically as to the use of company funds. The investigation is being investigated by a law firm and I understand that the process will be completed shortly. Obviously, I shall play no part in the management of the investigation under way. As a significant share owner, my commitment to the company, which I founded over thirty years ago, remains absolute - to our people, our clients, our shareholders and all of our many stakeholders. I do not intend to make any further statement at this time'.

Sorrell has led the group since 1985, when he began his strategy of acquiring ad-related companies (including J Walter Thompson and Ogilvy and Mather), and the group now has a data investment management (DIM) division, whose portfolio of agencies includes Kantar TNS, Kantar Millward Brown and Lightspeed. Last month, WPP reported that 2017 annual revenue in its DIM division had fallen 2.9% to £2.69bn on a like-for-like basis; while overall group revenue declined 0.3% on the same terms. At the time, Sorrell said it had not been a 'pretty year' for the business.