Jan Koum, the CEO and co-founder of messaging tool WhatsApp, is leaving the company in the wake of parent company Facebook's association with data firm Cambridge Analytica. 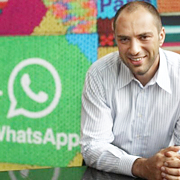 Last year, Facebook was fined EUR 110 million by the European Commission, for providing misleading information when it acquired WhatsApp, in 2014. Koum (pictured) and his co-founder Brian Acton developed WhatsApp with a focus on user privacy and when it was acquired by Facebook for $19bn in 2014, he promised users that these values wouldn't be compromised.

When the acquisition was first announced, Facebook said it would be unable to establish reliable automated matching between user accounts of the two services, but two years later WhatsApp announced updates to its terms of service and privacy policy, including sharing user information with Facebook, whose corporate advertising clients might then use it to improve their ad targeting. At the time, Facebook attempted to justify the backtracking as giving users the 'most reliable experience' and helping to 'fight spam', in addition to ad targeting.

According to the Washington Post, Koum had issues with Facebook's approach to privacy, user data and encryption, and had decided to leave after Facebook's part in the Cambridge Analytica scandal was exposed. Announcing his resignation, Koum said in a Facebook post that it was time to move on, adding: 'I'm leaving at a time when people are using WhatsApp in more ways than I could have imagined. The team is stronger than ever, and it'll continue to do amazing things. I'll still be cheering WhatsApp on - just from the outside. Thanks to everyone who has made this journey possible'.