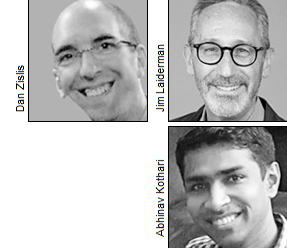 Founded in 1952 by Willard Simmons, and now owned by Symphony Technology, the New York-based firm measures consumer preferences, attitudes and media behavior, overlaying survey and passive data. Zislis joins from comScore, where he spent the last three years as VP of Sales, prior to which he spent a decade at GfK MRI, most recently as VP of Business Development. In his new role, he assumes leadership of Simmons' agency vertical, including sales, client service and strategy.

Laiderman previously worked at Acxiom as Managing Principal, Analytics, before which he led an analytics team at Nielsen focused on the global growth and delivery of segmentation, predictive modeling and custom research. He will now be responsible for 'shaping the vision, creating the roadmap and driving the execution' of Simmons' custom products and analytics.

Kothari joins Simmons from Mediaocean, where he was the Director of Development, responsible for developing analytical systems that converted large amounts of data into meaningful information. Prior to this he led the development team at ARMtech, an accounting technology company. He is now responsible for all aspects of engineering and technology, overseeing the growth of Simmons' platform and applications.

Commenting on the appointments, CEO Andrew Feigenson said: 'Every transformation starts with people. Dan, Jim and Abhinav possess a great deal of commercial and technical acumen. With the addition of these key personnel and the technology leadership coming from our private equity owners at SymphonyAI, Simmons is accelerating its transformation towards becoming an enterprise grade consumer technology company'.