Britain's Information Commissioner Elizabeth Denham has been made a CBE in the New Year's Honours list, after a year of high profile problems and responses for her office. Recently appointed Chief Digital Officer for London Theo Blackwell was also honoured. 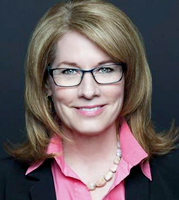 Canadian Denham (pictured) took the job as the UK's highest profile data protection official in April 2016, but the ICO faced perhaps its most challenging year to date in 2018 with the Facebook / Cambridge Analytica scandal blowing up in the Spring and the implementation of GDPR in May. The same month, the ICO announced it was recruiting up to 200 new investigators, including no fewer than nine Heads of section, among them a Head of Intelligence and a Head of Investigations.

The CBE honour was awarded for 'services to data protection'.

Blackwell, who became the capital's first Chief Digital Officer in August 2017, received an MBE for services to local government digital, while Scottish Government CIO Anne Moises was awarded the OBE for services to digital development.

The ICO is online at www.ico.org.uk .