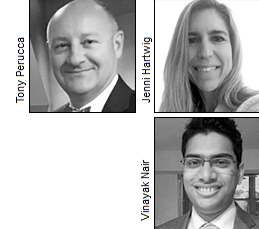 Perucca takes up his new role in the Seattle, Washington office after a decade at Comscore, where he latterly served as VP, Syndicated Customer Success, leading a 25-person customer success team managing 1,000 syndicated US clients. In his new role, he will manage the growth for Verto's local Seattle office and oversee expansion of the firm's presence in the Pacific Northwest with local technology clients. Hartwig joins in San Francisco after more than seventeen years at Comscore, where she worked in a number of roles including VP Client Solutions assisting sales team to generate new business; and Nair joins after eight years at Comscore, the last seventeen months spent as Director of Analytics.

The three report to company President Pat Brennan, who comments: 'More and more companies are recognizing that cross-device, behavioral analysis should be core to their research approaches in brand tracking, ad evaluation, and basic consumer understanding. Given our unique panel assets, we felt it was time to bring in proven and highly talented leaders like Jenni, Tony, and Vinayak to help guide both our capability and clients through this transition'.

Meanwhile Stenback has joined Verto's Helsinki Data Lab, with a background which includes working at tech growth companies such as LeadDesk, and M&A consultancies including Ernst & Young. In his new role, he is tasked with helping the company organize and manage financial planning, budgeting, and investor relationships, reporting to CEO and founder Hannu Verkasalo.

Last summer, Verto raised $13.4m in growth financing, which it is using to fuel continued growth in the media measurement market, and boost its customer success program, its commercial account management and its Data Lab.