Sir Martin Sorrell's new company S4 Capital is to open for business in India, with offices in Mumbai and Bangalore, and has brought in former Ogilvy India WW President Poran Malani to lead them. 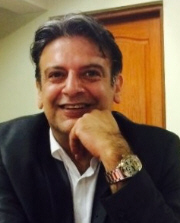 S4 was formed by Sorrell in May last year, just 6 weeks after quitting WPP. The new locations will bring the total for S4's two firms, MediaMonks and MightyHive, to eighteen, spread across fifteen countries.

Malani (pictured) spent nearly ten years at Ogilvy & Mather India, heading up its Southern Group; after three years as Global SVP at McCann Worldgroup New York, with stints either side as a full-time consultant for Coca-Cola and Vodafone.

Sorrell says of the move: 'As you can imagine, we are delighted to announce our entry into the vibrant Indian market. India is a country that we admire and respect. We expect great things from Poran in a short amount of time. No pressure. We believe that the shift to digital presents both MediaMonks and MightyHive with significant opportunities in a market that will become even more important as India becomes the most populous country on earth'. MediaMonks CEO Victor Knaap adds: 'India has a rich culture of visual storytelling and besides that, houses an enormous pool of tech talent. What MediaMonks can bring to the market is merging those disciplines - film and tech - by inviting directors and developers to come together and produce world-class digital storytelling'.