Harris to Close Asia Offices and Reduce UK Staff by 50

Harris Interactive has announced the closure of its Hong Kong, Singapore and Shanghai offices, and restructured its UK operation with the loss of around 50 staff. 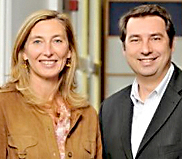 Last month, the firm announced that President and CEO Kimberly Till had left and been replaced on an interim basis by former COO Al Angrisani, who had recently been brought back to advise on a turnaround strategy following a 9% drop in quarterly revenue.

In an SEC filing, the firm said that the decision to close Harris Asia's three offices had been made by the Board, as the operation does not 'adequately support' the company's strategic objectives.

It is not yet known what costs will be incurred as a result of the closures, but the Board is anticipating contract termination and severance-related charges resulting from the disposal.

In the UK, Nathalie Perrio-Combeaux and Patrick Van Bloeme (pictured) were brought in earlier in the year to oversee the 'shake-up' of the UK business.

At that point, the UK had shown negative trends in both revenues and profits for the previous four years, and the loss of a multi-million dollar tracking study in October resulted in the firm having to eliminate 15 UK posts.

The Board has today approved plans to slash a further 50 jobs in London and Stockport, which will result in around $0.6m in termination expenses.

In addition, the size of Harris Interactive's premises in Brentford, Middlesex will also be reduced, with lease-exit charges expected to be around $0.8m.

In a statement, Harris Interactive said it will now focus its UK custom market research business around its financial services, technology/entertainment, media and telecoms divisions, as well as on brand, loyalty and new product development services.

The firm added that as it continuously reviews its operations and cost structure, it may pursue 'additional cost reduction actions'.