US brain research specialist Nielsen NeuroFocus has announced a new technique called Neuro-Compression, developed in response to a requirement from CBS TV to find out if a 30-second ad can be cut in half without losing some of its powers of persuasion. 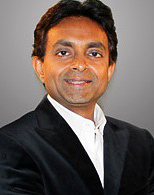 The new proprietary technology identifies which scenes in a commercial trigger the biggest changes in brain activity, in order that the ad can be edited into a shorter and 'more neurologically impactful' version.

Nielsen NeuroFocus founder and CEO Dr AK Pradeep (pictured) says the technique makes it possible to create an ad that engages viewers at a higher level and keeps them from switching their attention elsewhere.

According to Pradeep, human brains are able to anticipate and process storylines from very little content. 'Our brains are so smart, they retain the key pieces of logic, the key pieces of the flow,' he explains. 'If you threw out all the fillers, and got to the core, it's a lot more effective. Neuro-Compression ends up producing a better product.'

David Poltrack, Chief Research Officer for CBS Corporation, says that by rendering a shorter but often more effective and persuasive ad, it is possible to repurpose an ad across multiple platforms such as online, mobile and in-store digital displays. 'We believe that in the case of online and mobile, we're in a new frontier,' he adds.