Ipsos' MediaCT division, which specialises in measuring how consumers use and respond to media across different platforms, has opened a Data Science Hub in London. The new initiative is led by Neil Farrer, who takes on the role of Chief Data Science Officer. 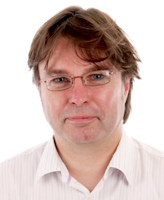 Farrer (pictured) has spent around 22 years at Ipsos, previously serving as MediaCT's Technical Director, and earlier as Sampling Manager at Ipsos RSL. He worked briefly at NOP, and began his career as a Programmer at geodemographics specialist Pinpoint Analysis, which was later acquired by CACI.

His new team brings together a number of technical and methodological experts from across the group, to consolidate the experience already gained in data science and big data. In addition, Ipsos Media CT will invest in recruiting further stats, maths and advance programming expertise. Early areas of focus for the team will include data fusion techniques on multiple data-sets, analysing mobile and web usage data, and integrating new external and client data-sets into standard applications.

Liz Landy, the division's MD in the UK, says the new hub will enable it 'not only to respond effectively to clients' requirements but also to have a proactive voice in the industry and to set standards for best practice.'