Japanese online specialist Macromill has merged with Netherlands-based online research and analytics firm MetrixLab. The combined firm will now operate under the Macromill brand, and has plans to open new offices in Southeast Asia, the Middle East and Russia. 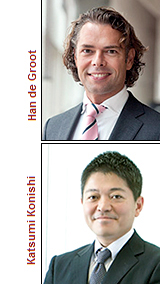 Founded in 2000, Macromill went private earlier this year through a takeover bid led by private investment firm Bain Capital Partners LLC. MetrixLab, founded in 1999, acquired US-based MarketTools in 2012, and was previously majority owned by its management.

Following the merger, the firm has a global team of more than 1500 professionals in the Americas, Europe and Asia, and generates annual revenues of $300m. The company will be led by former MetrixLab CEO Han de Groot and Japan/Asia CEO Katsumi Konishi. Former MetrixLab COO/CFO Jan Willem Gerritsen will become Executive Officer managing the US, European and Latin American businesses, partnering with Naoya Sugiyama responsible for people development and general administration, and Naofumi Nishi is responsible for corporate development.

Commenting on the deal, de Groot said: 'The new combination of Macromill and MetrixLab will continue to expand its global presence organically and through selective acquisitions. We will accelerate our ability to meet our clients' need for business information and consumer insights on a global basis, and we are also planning new offices in Southeast Asia, the Middle East and Russia.'