Sir Martin Sorrell, the CEO of marcoms giant WPP, received a 44% increase in 2014 pay, bringing his salary package to almost £43m. This makes Sorrell the highest-paid FTSE 100 CEO, with a pay package more than twice the size of the second highest earner*. 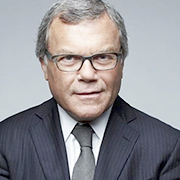 Sorrell (pictured) bought the business in 1985 and built it from a start of two employees to the 100,000 plus it employs today. WPP now comprises companies in the advertising, media, PR, branding, communications, digital, and marketing sectors, and also includes the firm's Data Investment Management arm (formerly known as Consumer Insight), which includes TNS, Millward Brown, The Futures Company, and many other specialist companies.

According to WPP's annual report, in 2014 Sorrell received a £1.1m base salary, a pension contribution of £456k, a short-term bonus of £3.5m, and a long-term incentive plan bonus of £36m. His expenses also included £274k to cover his wife's travel costs and £43k for other expenses such as clubs and security. In 2013, Sorrel saw his annual pay package rise by nearly two-thirds to £29.8m, from £17.5m the previous year, boosted by a plan linked to the company's share price and performance. The previous year, 59.5% of WPP shareholders had voted against a proposed 60% increase to Sorrell's pay package.

Luke Hildyard, Head of Research at independent think tank, the High Pay Centre describes Sorrell's 2014 pay as 'dangerously excessive', and says it is essential that fund managers hold WPP to account when they get a chance to vote on this award on behalf of company shareholders. However, in WPP's annual report, Sir John Hood, Chairman of the firm's pay committee, defended the pay rise, claiming it was largely the 'product of exceptional performance delivered over the last five years', which he said had driven up the company's share price.