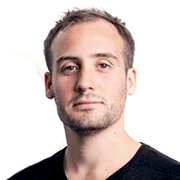 The Programme was launched in September 2013 and recently became the second agency to receive accreditation from UK professional body the MRS. Some of this year's new grads have joined from universities in and around greater Manchester, while others have relocated from Paris, Lyon, Brussels and Frankfurt.

GDP Manager Tim Griffiths (pictured) says of the scheme: 'For this intake we were keen to attract graduates with a range of language skills and experience of other cultures, to support the growing number of international clients that we work with. The rate of growth at Join the Dots enabled us to recruit more graduates than previously, and we're already planning for the 2016 intake, for which we are currently accepting applications'.

In October, Join the Dots brought back a former employee, Chris Haydon, as Senior Research Director after a three-year stint in London, and appointed four others in SRE and Research Manager roles.