YouGov President Peter Kellner is stepping down from the role at the end of March, when he will continue to write and broadcast about politics and elections, while also undertaking new projects. 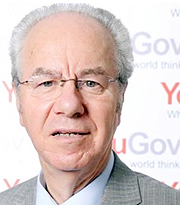 Before joining the company in December 2001, Kellner (pictured) was a journalist and political commentator for the Sunday Times, Independent, New Statesman, Evening Standard, BBC Newsnight, BBC election programmes and Channel 4 News. He wrote the 'Journalists' Guide to Opinion Polls' for the European Society for Opinion and Marketing Research, and is a regular speaker at industry conferences and seminars. As well as being a member of the British Polling Council's committee on disclosure, Kellner has been an adviser on polls and public opinion to the Bank of England, Foreign Office, Corporation of London, National Westminster Bank plc and Trades Union Congress.

He has been President of YouGov since 2007, before which, he was its Chairman from 2001 to 2007. Explaining his decision, Kellner said that five years ago, he decided to stay on for one more general election and step down, rather than keep the same role until 2020, when he will be 73. He added that he is proud to have played a role in YouGov's expansion from a firm of ten people in a single room, to one that employs more than 600 people in twenty countries around the world.

CEO and founder Stephan Shakespeare adds: 'It has been a pleasure working with Peter, one of our first employees and a trusted partner for over fifteen great years. Peter has been our voice of politics as the company has grown from a small media start-up to a global market research business. We wish him the very best in his new projects and no doubt we will stay close in the future. Our Chief Scientist, Stanford Professor Doug Rivers, will now oversee the methodology, with our London political team continuing to be led by Joe Twyman and Anthony Wells.'