WPP Chief Executive Sir Martin Sorrell, 71, and his wife Cristiana are expecting their first child together in November. 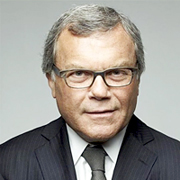 The couple, who married in 2008, are said by the Daily Mail to be 'delighted' with the prospect of the baby, which will be Sir Martin's fourth - he has three sons by his previous wife.

Cristiana Falcone Sorrell is Director, Media Entertainment and Information Industries for the World Economic Forum and is on the boards of Viacom and Revlon. In a recent Radio 4 profile of her husband, Falcone said she asked her 'quite persistent' suitor 'whether I was a strategic partnership or a hostile takeover' and he answered, 'you are surely a strategic partnership'.

The father-to-be will be looking worriedly at the bank balance and rising cost of school fees - a sizeable pay package in June was opposed by around a third of WPP shareholders and represents the last under the now-completed LEAP long-term incentive plan; while new British PM Theresa May has made an early pledge to reform the running of UK companies, including the introduction of binding shareholder votes on pay. We hope and trust he has managed to stash a bit away.

Sir Martin may decide to spend more time with his family once the baby arrives: in May it was revealed in the group's Annual Report by Company Chairman Roberto Quarta that it was beginning to think about who may eventually step into the biggest shoes in the advertising world. The report stated: 'At some point, we all leave our jobs. The question is when. Whether, in Sir Martin's case, that happens tomorrow, in one, two, three, four, or five years, or even over a longer period, we have already begun to identify internal and external candidates who should be considered'.

Our congratulations to the future parents!