WPP CEO Sir Martin Sorrell's pay for 2017 will fall by around £22m in 2017, with further drops scheduled for 2018 and 2021. The firm, whose high-paying 'Leap' scheme had in any case expired this year, notes that it 'understands share owners' increasing discomfort' with levels of 'reward opportunities'. 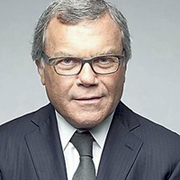 Sorrell (pictured), who is currently the UK's highest paid exec, set up the business in 1985. It now comprises companies in advertising, media, PR, branding, communications, digital, and marketing services, as well as the Kantar Data Investment Management arm, which includes TNS, Millward Brown, the Futures Company and many other specialist businesses.

Last summer, around a third of WPP shareholders voted against Sorrell's £70m pay package, with Peter Parry of the UK Shareholders Society describing it as 'ridiculous'. In March, it was announced that Sorrell had secured around £50m in this year's pay award under the now-expiring performance-related 'Leap' scheme. However, last Friday, WPP announced in its annual report that the maximum Sorrell will receive this year will be £48.1m, and from next year, his total remuneration will be nearer to £20m a year. From 2021, WPP will limit Sorrell's pay package to just over £13m.

In the annual report, John Hood, Chairman of WPP's Compensation Committee, stated: 'Notwithstanding the company's superior performance, we understand share owners' increasing discomfort with the levels of our programs' reward opportunities for outstanding performance'. This year's AGM will be held on 7th June, and the group's AGMs will include a vote on pay policy for the next three years.