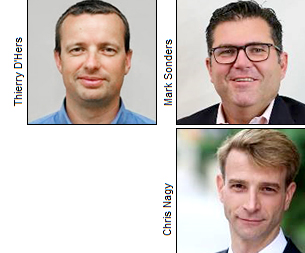 Established in 1992 as a pioneer of live-stream focus groups, FocusVision has made a large number of acquisitions in the last five years: MR video streaming firm ActiveGroup in 2013; research tool developer Revelation Global the following year; quant MR tech firm Decipher in January 2015, closely followed by Research Reporter developer Insight Marketing Systems; video research solutions provider Qualvu and its qual intelligence platform 24Tru at the end of that year; and shortly after, online panel management software firm Kinesis Survey Technologies. At the beginning of the year, the firm announced aims to integrate its collection of tools into a single offering, and says its three new team members will play a key role in achieving this outcome.

D'Hers, who previously led product teams at Microsoft and Tableau Software, will be responsible for leadership of FocusVision's entire product development organization. Sonders, who will lead the company's global sales and marketing efforts, joins after working at Vertafore and Thompson Reuters. Nagy joins with more than twenty years' experience to lead all financial strategies and resources for the company, having previously worked at Vela Trading Technologies, Radianz, NYFIX and Blackrock.

Commenting on the new hires, CEO Zlatko Vucetic said: 'We have identified key areas for continued business evolution and chief among such is a focus on providing solutions that deliver optimal experiences to our clients. Thierry, Mark and Chris will be integral in leading these strategic initiatives, and overall business innovation. These important hires come on the heels of a successful rebrand, and foreshadow more business and product announcements to come'.