A WPP shareholder group is opposing the re-election of Chairman Robert Quarta over concerns about the way founder and former CEO Sir Martin Sorrell left the business last month, according to an article in today's Times. 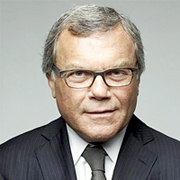 Sorrell (pictured) left WPP in April, after the Board hired an independent lawyer to investigate media claims of 'personal misconduct' against him; allegations which Sorrell rejected 'unreservedly'. At the time, WPP confirmed that Sorrell would be treated as having retired, as detailed in the Directors' Compensation Policy, and dependent on performance over the next five years, would get share awards totalling up to £20m - all indicating that he had not officially left under a cloud (a position known as a 'good leaver').

In a report to investors, advisory group Glass Lewis has recommended that shareholders vote against Quarta's re-election at the group's forthcoming AGM, because its concerns that the group had failed to prepare for the replacement of Sorrell as CEO had been increased by the 'opaque nature' of the investigation into his conduct and his 'good leaver' status. The Times reports that Glass Lewis is also recommending that investors reject WPP's pay report, under which Sorrell was paid £14ma last year, because it says shareholders should expect 'full disclosure regarding the investigation. Without this, Glass Lewis says shareholders are unable to determine the extent to which Sorrell should be treated as a 'good leaver'.

In addition, Glass Lewis says it is concerned about Quarta's increased workload, as he is also Chairman of medical equipment manufacturer Smith & Nephew.