Researchers at Syracuse University's S.I. Newhouse School of Public Communications are collaborating with Comscore, to identify the causes of advertising avoidance and audience drop-off during commercial airings. 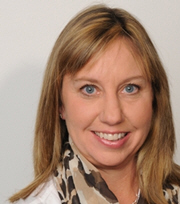 SU's multi-disciplinary team combined commercial data and academic research, applying neural networks to uncover relationships and patterns, and establish and define links among multiple variables in large and diverse data sets. This includes analysing program viewing at the start of a commercial 'pod' (a pod enables publishers to display multiple video ads within a single ad placement - similar to a commercial break on TV) and comparing it to the commercial audience.

As a result, SU has isolated a number of factors driving viewing declines. For instance, the combination of program originality/rerun, ad duration, number of ads in a pod, and number of pods in a program had more than 80% accuracy in predicting ad viewership declines. Beth Egan (pictured), SU's Associate of Advertising, said that the partnership had allowed her team to provide proofs to concepts that have been 'long-held truths' in the industry.

Further work is being carried out using a larger dataset and other machine learning algorithms.