Brad Rukstales, the President and CEO of Chicago-area data and insights martech firm Cogensia, has been fired after being arrested for his part in the recent storming of the US Capitol building in Washington DC, which resulted in violent clashes with police and five deaths. 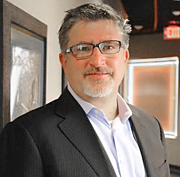 Rukstales (pictured) joined the pro-Trump riots on 6th January, when thousands of people converged in Washington, DC following the President's claims the election had been 'stolen' from him by voter fraud. The rioters broke windows to gain entry to the building, and then vandalized offices, and in a press release issued by the US Capitol Police on 7th January, it was confirmed that Rukstales had been charged with unlawful entry.

In a post on Twitter, Rukstales said that his decision to enter the Capitol was wrong, that he condemns the violence and destruction that took place in Washington, and that it had been the single worst personal decision of his life. In response, Cogensia issued a statement explaining that the company had placed him on leave of absence while they assessed the situation; and making clear that his actions did not reflect Cogensia's policies or values. Rukstales had served as company CEO for nineteen years, and according to research and government transparency group Open Secrets, had during this time donated to Republican political causes, including $2,600 to President Trump's campaign.

He has now been fired and replaced with Joel Schiltz, SVP and Chief Operating Officer, as Acting CEO. Schiltz has spent the past more than seventeen years at Cogensia, which helps clients with digital advertising, online and off-line CRM, real-time predictive modeling, data management, statistical modelling and customer segmentation services. In a release, Schiltz noted: 'Cogensia condemns what occurred at the US Capitol on Wednesday, and we intend to continue to embrace the values of integrity, diversity and transparency in our business operations, and expect all employees to embrace those values as well'.