Nielsen is to promote Mitch Barns to the role of Chief Executive Officer from January 1st 2014, replacing David Calhoun who takes on the role of Executive Chairman. 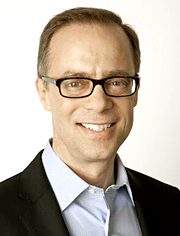 Barns (pictured) joined Nielsen in 1997 after nearly twelve years at Procter & Gamble. He currently serves as President, Global Client Service, in charge of the firm's Watch and Buy client service teams worldwide. During his sixteen years with the company, he has also served as President, Media US; President, Greater China; President, Consumer Panel Solutions; and President, BASES and Analytic Consulting.

Calhoun comments: 'Nielsen is successfully implementing its global strategy, and the time is right to name the next leader to take the company to its next phase of growth. Mitch's strong track record at the helm of a number of key Nielsen business units around the world - combined with his vision and commitment to our strategic plan - puts the company on solid footing for continued global expansion and value creation. I will continue to remain invested in Mitch's success in my new role.'

Calhoun will replace James Kilts, who will step down as Chairman, but will remain a Board member. Calhoun has served as CEO since joining the company in August 2006, following a 26-year career with GE. In his new role, he will remain actively engaged in the business, providing counsel to Barns and other executives into 2015. In addition, he will remain a substantial owner of Nielsen equity, purchased and earned while CEO.

Back in 2011, MediaPost suggest that Barns was a potential heir to Calhoun, who in 2010, added three years to his contract in exchange for a salary rise and a $6m signing bonus.