Nielsen has promoted Steve Hasker to the role of Global President, overseeing its business across the media sector, in addition to leading its product portfolio across both Watch and Buy segments. 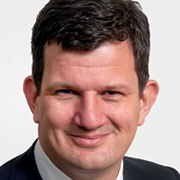 Yesterday, the company announced it had promoted John Lewis to the role of Global President, in charge of its worldwide business in the FMCG vertical.

Hasker (pictured) joined the firm in 2009 as President, Media Product Leadership and Advertiser Solutions - a business unit set up to help advertisers 'deliver the right messages to the right consumers'. In this role, he has led Nielsen's TV and digital audience measurement, advertising effectiveness, and social media solutions. Earlier, he worked at McKinsey & Company, where he was a Partner in the Global Media, Entertainment and Information practice; and before this he held financial roles in the US, Russia and Australia.

Hasker also lectures regularly at Columbia University, and his research into the influence of social media networks on consumer behavior in media has been published in the Harvard Business Review. He is a Board member of the International Radio and Television Society and the Center for Communications.