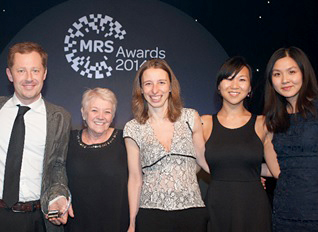 The Grand Prix Award was introduced last year 'to recognise the submission that succeeds in demonstrating the impact that research can have when properly commissioned, delivered, designed and acted upon. This year, the Ipsos MORI and Amgen team (pictured with MRS President Dianne Thompson, second left) received it for their global syndicated ethnographic investigation into patients living with Psoriasis, which the judges say 'should be read by any researcher interested in the power of research for genuine social change'.

The Best In-house Team went to Guardian News and Media for the number of research projects its team undertakes each year, and for being able to demonstrate 'impressive commercial returns' on investment, described by the judges as 'the Holy Grail in research'.

BBC Media Action were also among the winners at the awards, with the broadcaster taking home the President's Medal, presented by new MRS President and former Camelot CEO Dianne Thompson.

Additionally, the night saw a re-introduction of an award presented to the Newcomer of the Year to recognise the contribution of new talent in the industry. This year's winner was Northstar Research Partners' SRE Samantha Bond for her 'outstanding achievements during the formative years of her career'.

Other winners at this year's event were:

MRS CEO Jane Frost (pictured) comments: 'The Awards this year have been a testament to the resilience of the research sector. Research itself is also evolving with new and innovative agencies, technologies and methodologies bursting onto the scene. The new techniques demonstrated clearly show how adaptable the sector is and the levels of innovation and creativity is abundant.'