Kantar has announced that Mark Inskip, will take the role of Global CEO of its consulting business The Futures Company, from February. He replaces Will Galgey who is moving to the role of CEO of TNS UK. 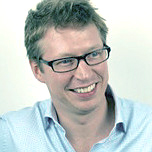 Galgey (pictured) was announced in November as the new long-term head of TNS UK after the sudden departure of Maureen Duffy.

Inskip will be based in London and will report to Kantar President Wayne Levings. He worked most recently as a partner at growth consultancy Manifesto, and his previous career includes spells leading strategic consulting services in Europe for Ogilvy; working as a partner and helping to create a Digital Marketing Consultancy for Accenture; and helping to launch house.co.uk at Centrica.

The Futures Company was formed in 2008 through the integration of The Henley Centre, HeadlightVision, Yankelovich and most recently youth research unit TRU. It now boasts eight offices in Europe, North America, Argentina, Brazil, Singapore and China.

Levings says Galgey has made 'an outstanding contribution' to the firm over 15 years, and as leader for the past four has managed improvements in its offer and geographical expansion. He welcomes Inskip's 'unique combination of deep experience from across the client, agency and consultancy worlds'.