Verve's Half Dozen Hires Include Flower of Research Now 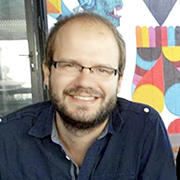 Flower (pictured) joins after seven years at Research Now, most recently as Director - Client Services, EMEA, and previously as Manager, Digital and Private Panels & Communities. In his new role, Flower will work alongside Director of Innovation Emel Mohammadally.

Other new members of the team are: