This year's MRS Awards saw UK charity StreetInvest carry off the President's Medal for its 'Growing up on the Streets' project, which has recruited street children in three African cities to provide observations on their experiences and those of other young people in their network. 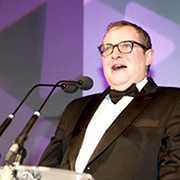 Announced at the Supernova London venue beneath the Savoy in Embankment Gardens last night, the ceremony was attended by 800 individuals and compered by ubiquitous comedian Miles Jupp (pictured). Other winners included members of Lightspeed GMI and BBC Worldwide who received the Grand Prix Award for Greatest Impact for their joint study uncovering the difference between what people say and what they genuinely think or are likely to do.

Newcomer of the Year was awarded to ABA Market Research RD Laura Gillespie and Hall & Partners Research Manager Sophie Wells, who the judges said particularly stood out 'for really going the extra mile to fly the flag of the research industry'. Tesco's Insight unit scooped the Best In-house Research Team, while TNS was given the Best Innovation Award for its new methods for delivering personalised content. In other groups, Flamingo won the award for Best Agency with turnover over £20m, and MTM in the under £20m category.

MRS CEO Jane Frost comments: 'From charities, the government, media and business, market research is an industry which has the opportunity to really benefit strategic decision-making and improve understanding for clients and end-users. It is important that we keep true to the fundamental raison d'etre of research - to understand and inform - and it is our ability to do this which enables us to positively touch the lives of all sectors in which we operate, and will continue to provide us with a bright future'.

The complete list of winners can be found online at: www.mrs.org.uk/awards .