GfK has appointed consumer goods industry exec Peter Feld as its new Chief Executive Officer. His predecessor Matthias Hartmann resigned last August due to 'differing views' on the long-term direction of the business between himself and majority shareholder GfK Verein. 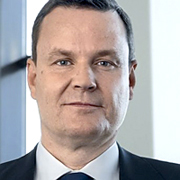 Feld (pictured) joins from cookware and coffee machine maker WMF Group, where he served as Chairman of the Executive Board and CEO. Prior to this he gained more than twenty years' management experience in global companies such as Beiersdorf, Johnson & Johnson and Procter & Gamble. At Beiersdorf from 2010 to 2013 he was an Executive Board Member, responsible for activities in Europe and North America.

Following the departure of Hartmann, Management Board member Gerhard Hausruckinger added responsibility as the Board's Speaker.

Commenting on the appointment, Ralf Klein-Bölting, Chairman of the Supervisory Board, said: 'With the appointment of Peter Feld as CEO we have not only found an excellent and highly experienced manager, but also someone who knows how to deal with the challenges our company is faced with. He is a proven expert in understanding customer needs, as well as in helping companies to expand internationally, and strategically drive digitalization across the business. The Supervisory Board is convinced that he is the ideal person to lead GfK SE into a successful future'.

The firm, which recently sold an 18.5% stake in the business to US-based private equity firm KKR, is online at: www.gfk.com .