Nearly a third of WPP's shareholders have rejected its latest remuneration report, which includes the Board's decision to give founder and former CEO Sir Martin Sorrell a long-term share award of up to £20 million over the next five years. 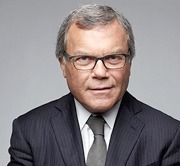 Sorrell (pictured) left in April amid claims of possible misuse of company assets and 'personal misconduct'. At the time, he rejected the allegations 'unreservedly', Reports in the Washington Post at the weekend and Financial Times on Monday claimed that Sorrell's departure had been triggered by complaints that he had bullied junior employees and allegations that he paid for a sex worker using company funds. Sir Martin, who signed a non-disclosure agreement when he stepped down, has 'strenuously' denied both claims.

At today's WPP AGM, Chairman Roberto Quarta was re-elected with 84.5% of votes, compared with nearly 98% in the comparable vote last year. More than 27% of shareholders voted against the remuneration report, which includes the Board's decision to retire Sorrell under a 'good leaver' status. Sorrell, who was the longest-serving FTSE 100 CEO until his departure, was paid £13.9m in 2017, £48.1m in 2016 and £70.4m in 2015. He is currently in the process of setting up a new company focused on 'technology, data and content'.

Separately, in a memo issued to WPP staff, Co-COO Mark Read reinforced WPP's values of 'fairness, tolerance, kindness and respect', adding: 'You will no doubt have read the press coverage this week about WPP and Martin Sorrell, including allegations about his behaviour towards people at the parent company. Although we can't comment on specific allegations, I feel we should remind ourselves of and reinforce the kind of values we want and need to have within every part of our business. It should hardly need saying that all WPP working environments must be places where people feel safe and supported. They must also be places where people are able to raise concerns if they want to, and where those concerns are dealt with when they need to be'.