In the US, online survey software provider QuestionPro has moved its headquarters from California to Austin, Texas, where it has relocated eighteen employees and announced plans to expand the team to about 60 by the end of the year. 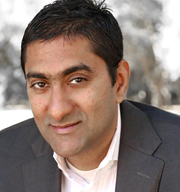 Founded in Seattle in 2005, before moving to San Francisco, QuestionPro offers tools for creation, distribution and analysis of surveys, as well as a platform for polling, tablet-based mobile research and data visualization. The firm also has teams in Germany, the United Arab Emirates, India and Mexico, and currently employs 200 worldwide. New positions in Austin, will mainly be in marketing and sales.

CEO and founder Vivek Bhaskaran (pictured) says that the relocation will provide the company with scope for further expansion, adding that Austin's cost of living makes it easier to hire talent, while also attracting people who live outside of Texas. 'We couldn't build that big a team without outside funding in the Bay Area, which is why we wanted to move to Austin. The Bay Area was not sustainable for us; for the same price, we can find really amazing people in other areas,' he added.