UK-based agency Trinity McQueen has announced the acquisition of Blinc Partnership, which specialises in research for content and creative development. 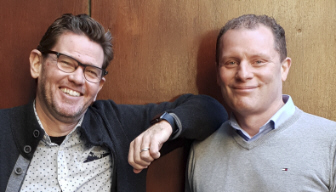 Blinc was founded in 1997 and works for clients in TV, film, media and advertising, including the BBC, Sky, C4, ITV, Amazon, Renault, Peugeot and BMW. The buy gives Trinity McQueen exclusive access to its propriety tech platform, which has been used to develop British TV shows, box sets and ads.

Blinc co-founder Neil Griffiths will leave the business, while the rest of its staff will move in with Trinity McQueen at their Clerkenwell, London office. Cliffe says Blinc's innovative tech means clients 'will get quick feedback on how to develop successful TV shows, films and now advertising content', adding: 'It's a great addition to the agency, as we broaden our portfolio of services'. Horsfield (pictured right) notes that the firm has 'ambitions to grow further in central London and Leeds'.

Paul Barrow (pictured left), Director and co-founder of Blinc, says the deal is 'a great cultural partnership for Blinc. Trinity McQueen is a high profile agency and uses the same behavioural science conventions in their work as us. Our tech can be used in different sectors and be plugged into other research services'.