Adam Crozier, former CEO of broadcaster ITV, the Football Association and Royal Mail, has been named Non-Executive Chairman of Kantar. 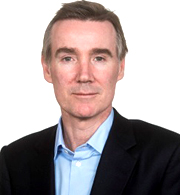 Private equity firm Bain Capital acquired 60% of Kantar last year for $4bn (£3.2bn), and was later reported by the Sunday Times newspaper to have approached Crozier (pictured) about the role - the appointment is now confirmed. During his career, Crozier also served as CEO of Saatchi & Saatchi, and he is currently Chairman at Whitbread, ASOS and Vue International.

Stuart Gent, an MD at Bain Capital, comments: 'Adam's experience at the intersection of advertising, media, retail and technology, alongside his track record of guiding management teams on transformation journeys, make him an excellent appointment to support Kantar in their next phase of growth'.