Further to news of Eric Salama's intention to resign as CEO of Kantar during 2020, the firm has now announced that he has stepped down with immediate effect. However, according to FT.com, Salama has been 'abruptly ousted' after Bain Capital decided to cut short his remaining time at the company. 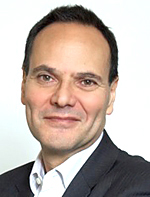 WPP recently sold a 60% stake in Kantar to Bain Capital Private Equity, with total aggregate net proceeds of around £2.4bn ($3.1bn). In early December, Kantar announced that Salama (pictured) had decided to step down from his role at some point in 2020, and that he then planned to serve as a non-executive Director and consultant at the company. At the time, Salama gave his decision to leave as being for personal reasons, giving him time to 'reflect' nearly a year after he was stabbed by a man attempting to steal his car in the London suburb of Kew.

FT.com says that according to two people 'familiar with the matter', following a dispute over unspecified business decisions, Salama was told on Friday that he would be relieved of his responsibilities with immediate effect. According to these unnamed sources, the decision was taken by Bain Capital, and one of the sources described the 'dismissal' as a 'power play'.

Salama had worked for the WPP group since 1994, after it acquired consumer consultancy The Henley Centre, where he latterly served as Joint MD. He began his career as a researcher and speechwriter for The Labour Party Foreign Affairs Team in the House of Commons, and started at WPP as Director of Strategy, before joining Kantar in 2003. According to Kantar's announcement, Salama will be on garden leave until the end of June.

In this announcement, Kantar's Board of Directors thanked Salama for his 'immense contribution and leadership', adding: 'With delivery of 2020 growth plans now firmly underway, the Kantar Board of Directors decided that this was the right time for Mr Salama to step down. The Executive Committee will lead the business until the appointment of a new CEO'.