Nielsen has reported a 0.3% drop in first quarter revenues to $1.56 billion, equivalent to a 1.5% rise on a constant currency basis. It also turned a net profit of $43m in Q1 2019 into a net loss of $18m a year later, although adjusted EBITDA remained positive. 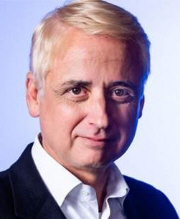 Last November, the ratings giant announced plans to spin off its Global Connect business, which is similar, but not identical to the former 'Buy' segment - creating two independent publicly traded companies with the other being Nielsen Global Media. The group now expects the closing to take place in Q1 2021, largely due to temporary shutdowns of government agencies that are necessary to move the separation forward, and it expects $275m to $300m of cash separation-related costs in 2020.

Group net income was impacted by separation-related costs and higher depreciation and amortization expenses, partially offset by lower restructuring charges. Adjusted EBITDA of $395m was down 4.8% on a reported basis compared to the prior year, or down 2.9% on a constant currency basis.

CEO David Kenny (pictured) comments: 'Nielsen has a strong and enduring business model, serving the essential media, consumer packaged goods and retail industries, with a high volume of subscription revenue. We remain well-capitalized and are closely managing cash flow and our balance sheet. Our cost actions allow us to continue investing in the key strategic priorities that will drive our long-term growth. We also continue to make progress on operational readiness as we position Media and Connect for success as separate, standalone companies'.