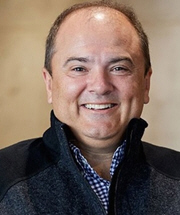 Previously known as Photon, the Enero network comprises eleven specialist companies operating out of three hubs in Sydney, London and New York. Scrimshaw (pictured) will join on 1st July after a career spanning the media, publishing, technology, consumer, retail and sports sectors. Most recently, he founded and led sports media company Unscriptd, which was acquired by New York based publisher The Players Tribune in 2018. Earlier, he spent eighteen years at Nike, including three as VP/Chief Executive Western Europe, based in Amsterdam; and before this he served as CMO for EMEA and held leadership roles in Europe, the US and Australia.

Melhuish had been with the business since 2012, having previously founded creative agency BMF, which was sold to Enero in 2007. Scrimshaw's will start on a fixed remuneration annual salary of $800k, and will be eligible for participation in an annual incentive payment of up to a maximum of 70% of this, depending on group EBITDA.

Commenting on Scrimshaw's appointment, Enero Chair Ann Sherry said: 'Brent has a wealth of leadership experience across marketing services on both agency and client side, has worked and lived in a number of our key geographic markets and brings a strong global perspective on building brands. His track record in innovation combined with his entrepreneurial spirit adds another layer of expertise to our group's growth ambitions'.