Data collection specialist Norstat has appointed Romain Barbet as Managing Director in its Paris office. He will replace Norstat France co-founder Marc-Antoine Jacoud, who is staying with the firm for the next couple of months to assist with the handover. 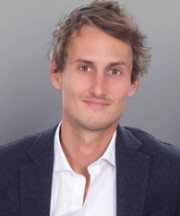 Owned by Triton and headquartered in Oslo, Norstat offers consumer surveys across nineteen European countries, through more than 650,000 active panelists. The company also offers face-to-face and telephone interviews, mystery shopping and focus groups. Barbet (pictured) joins after sales roles at real estate investment company Aronde Immobilier, prior to which he ran his own wall decoration and image design company Pixopolitan, which operated in both Paris and New York.

Barbet will take over from Jacoud, whose next career move is not yet known. COO Erling Eriksen said Barbet's appointment had been handled in full cooperation with Jacoud, and that he was not aware that Jacoud planned to move on to another company. Eriksen comments: 'We have made great progress since we started Norstat France together with Marc-Antoine in late 2016. We have built a solid consumer panel, hired a very competent team and developed several great client relationships. I believe Romain is exactly the right character to continue the journey we have started and to build a stronger and bigger company'.