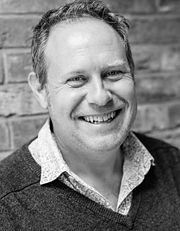 MiQ, which has offices across North America, Europe and Asia Pacific, connects clients' first-party data and then enhances it with second- and third-party data. The firm then analyses the results using data science technology and resources, and then uses this insight to build creative with the right messages which are then targeted at the right audiences through programmatic ad campaigns.

Ivey (pictured), who was previously UK CEO, joined MiQ almost three years ago, having previously been a Non-Executive Board Member and then Global CRO at Avid Media. Prior to this, he was MD, UK, at Collective, where he oversaw the acquisition of the company by Time Inc. UK. During the last nine years with the company, Sideras has moved from the trading team to become MD of the UK business. Turner steps into Sideras' previous role to lead MiQ's UK business, having joined from Agenda 21 over two years ago.

Company President Richard Dunmall comments: '2020 marked an incredible year of growth for both the company and the programmatic industry, and we're thrilled to have a talented leadership team in London who are committed to continue this throughout EMEA.'