14% Organic Growth for Ipsos in Q1 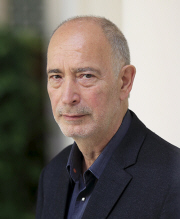 Q1 2020 was dented towards the end by the onset of the pandemic, but a strong January and February meant the quarter was very similar to Q1 2019, making the latest results a good measure of the firm's recovery. The firm says March 2021 has been particularly strong.

Ipsos says performance by region reflects the course of the pandemic, with those that were hit early and are controlling the contagion the strongest in economic recovery. Asia, despite a strong performance in China, is the only region where Ipsos' activity in 2021 is slightly lower than in 2019. In the Americas as a whole, revenue is up 4% with North America stronger: in the southern continent, revenue 'will only return to a satisfactory level and resume growth if the health situation improves'.

In EMEA, total growth was 24.8% or 28% organically. Central and Eastern Europe grew by 7.5% with all other markets in double digits. The firm says it is particularly well-placed to benefit in Western Europe from commercial and public sector demand for information about the new world. As a result of this strong EMEA growth, the region now accounts for just over half the group's total global revenue. 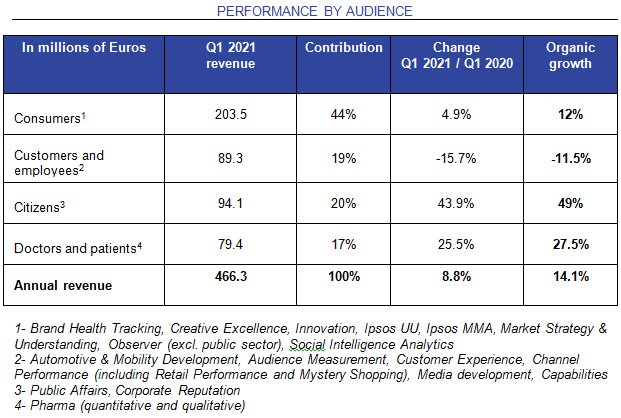 Research among 'Citizens' again outshone other areas with organic growth just a fraction under 50%; while work among 'Doctors & Patients' also grew rapidly, up 27.5%. Between them these now account for some 37% of all Ipsos revenue. The group divides its other business into 'Consumer' - services that 'qualify people as consumers', which it says are 'regaining momentum' after a decline in 2020; and those relating to 'Customers and Employees', which 'were already struggling in 2020 for technical and sectoral reasons', including the need for physical contact and the high proportion of clients in sectors such as transport, hotels, restaurants or tourism.

In terms of profitability, Ipsos notes that it is 'in line with the objectives for the year and significantly higher than the same period last year' but says that 'the suddenness of this decline in activity did not allow us to immediately reduce our costs to a similar extent, as they are partly fixed and were proportionate to the growth forecast for the year 2020'. Net debt ratio has fallen sharply over 12 months and liquidity is described as 'good', with EUR 327 million in cash and around EUR 300 million in undrawn bank facilities.

Looking to the future, Ipsos says it has 'strengthened its ties with its clients and adapted its solutions so that they are simple to implement and provide information that is secure, relevant, easy to use and as up-to-date as possible', adding: 'Above all, our company has multiplied initiatives to make its employees and partners feel supported, included and associated with its success'. Demand for its services has been 'strong' since last autumn and the order book is also 'high at the moment': all of which mean that 'despite the inevitable uncertainties linked to the health situation and its consequences on society, economic activity and, more generally, social stability, Ipsos is in a position to do better in terms of revenue than in 2020 and also than in 2019. The growth of its business should be accompanied by an improvement in its operating margin compared to 2020'.