Ad platform LoopMe has received a patent for its PurchaseLoop advertising campaign measurement solution. The firm has also appointed former Nielsen exec Rob Cukierman as General Manager of Measurement and Product Partnerships, based in New York. 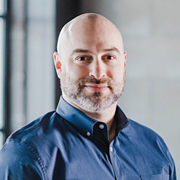 Separately, Cukierman (pictured) joins from data platform Zefr, where he served as SVP, Sales Strategy. Before this, he was VP, Sales Strategy & Partnerships at music video network Vevo, and he spent nearly seven years at Nielsen, where he latterly served as VP, Digital Sales & Client Service.

Stephen Upstone, CEO and co-founder, comments: 'We've had an incredibly strong first half of the year with many exciting developments in growth and innovation, and we look forward to having Rob join our leadership team to drive further success across our measurement solutions.'