Kirsty Fuller, CEO of video intelligence platform Big Sofa Technologies, is stepping down from the role and will become a Non-Executive Director from next January. She will be succeeded by Sam Curtis, current Head of Client Partnerships and Business Development, in a planned transition. 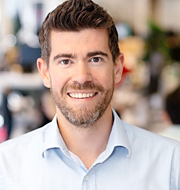 London-based Big Sofa offers a platform for users to upload, edit, analyse and share video and other digital content; a behavioural data and analysis product called Lifestream; and an experiential data and analysis tool called Lifeshare. In 2018, Ipsos became an investor in the firm, and more recently Big Sofa secured an undisclosed 'seven-figure' amount of funding, to drive the continued development of its platform and to make hires in the UK and US.

Fuller joined in 2018, having founded consumer and cultural insight agency Flamingo in 1997 and sold it to Omnicom ten years later. At the beginning of next year, her current CEO role will be filled by Curtis (pictured), who joined in 2019 from tech-enabled customer insights platform Streetbees, where he served as Head of Client Strategy. Prior to this he was MD of Moment10, which collects consumer insights at specific 'relevant' times. Earlier, he worked for Kantar as Global Data Lead, having spent the previous nine years at TNS, latterly as Global Director, Retail & Shopper.

Fuller comments: 'I have really enjoyed my time as CEO. My remit was to restructure and refocus the business, establishing a secure foundation for the next phase of the company's development. That task is now complete, and it is time to pass the leadership baton to Sam, who is an outstanding talent with data and technology expertise and the ability to connect with the next generation of clients. It is a privilege to count him as a colleague and a friend and I will continue to support him in any way I can as a member of the Big Sofa Board'.