Interpublic's marketing intell company Kinesso has appointed four new Regional CEOs, Matt Ware, Andy Butters, Jorge Chavez and Sean Muzzy, all of whom are currently leaders in the group's Matterkind activation division and who will retain these roles alongside their new ones. 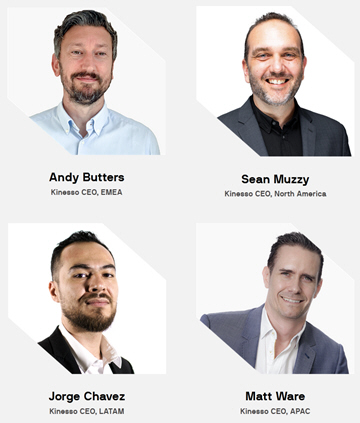 Kinesso was created in October 2019 and built on Interpublic's acquisition of data firm Acxiom to create data-based marketing applications focused on trust and security, campaign optimization and precision audiences. Towards the end of last year it launched an audience targeting solution called Kinesso Intelligence Identy (Kii - pronounced 'key'); and Kanvas, a developer community focused on challenges such as defining audiences, creating insights, and running and optimizing campaigns.

The four new Chief Execs will serve as a single point of contact for Kinesso and Matterkind services and solutions - Ware in APAC, Butters in EMEA, Chavez in LATAM and Muzzy in North America. Before joining Matterkind, Muzzy was Global Chief Product Officer, Neo (WPP), while Ware was Managing Director for Xaxis Japan. Butters and Chavez are IPG veterans having spent sixteen and ten years in the Group, respectively.

According to Arun Kumar, Chief Data and Technology Officer at IPG and Global CEO at Kinesso, 'Putting Regional CEOs in place supports the kind of horizontal integration that will spark additional innovation at Kinesso. Matt, Andy, Jorge and Sean will give us a unified, global focus on the challenges we need to solve for our clients - including better connections between their martech and adtech - and will surely be a catalyst for further growth for Kinesso and our clients'. Erica Schmidt, Global CEO at Matterkind, says: 'I couldn't be more thrilled for Matt, Andy, Jorge and Sean. They already have a track record of success leading Matterkind's business in these regions, and I know they will continue to deliver excellence in their new roles'.