In the US, the Market Research Council has appointed MESH Experience founder Fiona Blades as this year's President. 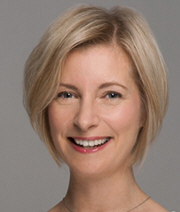 Founded in 1927, the Council is a prestige membership organisation which aims to provide a focal point around which 'distinguished marketing research professionals can gather for the development and advancement of their mutual interests'. Originally meeting at The Harvard Club in New York City, it switched to The Yale Club thirty years ago.

Previous Presidents have included George H. Gallup (1934-1935) of polling fame, Rena Bartos (1991-2), one of the first US female ad execs, and David F Poltrack (1995-7) the CBS insight leader who recently retired after 50 years with the business.

Blades (pictured), who moved to New York six years ago, takes over from former Geopath President Kym Frank, who now serves as Global Chief Experience Officer at Motionworks International. Blades says she aims to keep the values and essence of the Coucil, while also making it more representative of the MR industry. She plans to broaden its footprint, firstly by opening the doors to younger 'change makers'; secondly by extending appeal to wider specialisms in the MR ecosystem such as AI, technology, and data science; and thirdly, increasing the geographical reach from the US to a more global presence. Her 'big initiative' will be to develop the MRC Executive Leadership Program.

Blades comments: 'The MRC is a fantastic organization with a heritage of 'change makers' - such as a young A C Nielsen meeting an MIT engineer at the MRC inspiring the creation of his agency through to Diane Hessan inventing research communities in the 21st century. Members are at the heart of the organization, and they get the most benefit from other members - the magic of brilliant minds networking together moves our industry forwards in leaps and bounds'.