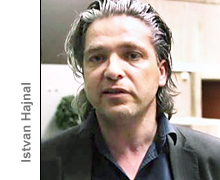 Hajnal (pictured) joins after seven years at GfK Belgium, where he led the Marketing and Data Science team. Before this he founded his own consultancy Hajnalytics, and was a Data Scientist / Scientific Advisor at predictive HR analytics firm iNostix (acquired by Deloitte in 2016). Earlier he spent a decade at Nielsen, initially as the firm's first senior statistician, then Head of Statistics Northern Europe, before taking an international role as VP of Global Statistics Training COE.

In his new position, Hajnal will manage the newly created Audience Measurement Data team, which has been added to the existing Data Science and Analytics team. As part of this position, he will also be involved in the firm's Nationaal Media Onderzoek (NMO) and the international Affluent Surveys.

Commenting on the appointment, Ipsos Netherlands Country Manager Daan Versteeg said: 'We are very excited to have Istvan on board. His experience, knowledge, and management capabilities will complement and innovate our growing team of data scientists and analysts for audience measurement'.