US media ratings consortium OpenAP and TV ad trade group the Video Advertising Bureau (VAB) have teamed up with a group of TV broadcasters to form a joint industry committee (JIC) and create a certification process for emerging cross-platform measurement solutions. 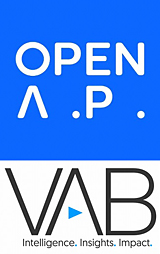 In partnership with Fox, NBCUniversal, Paramount, TelevisaUnivision and Warner Bros. Discovery, the new JIC will fund data initiatives designed to accelerate measurement innovation. Initial tasks will be to establish and maintain a measurement certification process, in partnership with the VAB, for third-party measurement vendors conducting cross-platform video currency services. The JIC will also create a programmer data set, to help third-party measurement vendors match streaming viewing data brought together by OpenAP infrastructure. In addition, the JIC will engage a third-party audit firm to verify the accuracy of the streaming viewing dataset.

According to some reports, the launch aims to push alternatives to Nielsen numbers, after the VAB claimed that the company under-counted panel homes during the pandemic, and the Media Rating Council suspended its accreditation of Nielsen's methods. In a statement, the new JIC partners said the committee has already seen progress being made across its members to develop measurement certification standards, which will be formalized and officially announced on March 1st. In the coming months, the JIC intends to expand membership to other video programme providers, and will also seek participation from ad agencies and trade bodies.

'By coming together to establish this JIC, we can collaborate and accelerate the efforts to implement a new multi-currency future that fosters more competition, inclusivity and innovation and will ultimately better serve advertisers, agencies and consumers', said Jeff Shell, CEO of NBCUniversal; Bob Bakish, CEO of Paramount; Wade Davis, CEO of TelevisaUnivision; and David Zaslav, President and CEO, Warner Bros. Discovery in a joint statement.