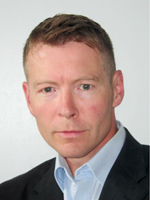 OnePoint has locations in the UK and USA, and recently added offices in Amsterdam, Germany and Egypt. The firm offers respondents a variety of ways of completing surveys, and says its channels work on any handset, in any country and in any language.

Stocks (pictured) joins with considerable European MR experience. Most recently, he served as a Consultant at global marcoms group Centigrade in Switzerland, prior to which he held senior pan-European sales and consulting roles at market research outsourcing company Annik, and founded and managed two offshore / near shore MR companies. Earlier in his career, he worked for Millward Brown for more than fourteen years, latterly as its Mainland European Data Services Director.

In his new role as Sales Director for France & French-Speaking Switzerland, Stocks will be based in Lyon and report to Chief Commercial Officer Rob Huijboom, who comments: 'With 12 years market research experience in the French market, Gary's significant local expertise will enable French and Romandie (French speaking regions of Switzerland) based organisations to realise the full potential of mobile research through the suite of OnePoint Global mobile survey technologies.'