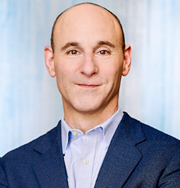 Founded in 1952 by Willard Simmons as Simmons Market Research Bureau, and now owned by Symphony Technology, the firm measures consumer preferences, attitudes and media behavior by overlaying survey and passive data. Feigenson (pictured) joins with more than twenty years' experience in digital research and technology. He most recently served as Chief Revenue Officer of Nielsen Catalina Solutions, before which he ran Nielsen Digital for six years, launching the firm's Digital Ad Ratings, Audience Segments and programmatic business, and working on the acquisitions of Vizu and eXelate. Earlier, he worked for private equity and venture backed companies, including ECI Conference Call Services (sold to West Corporation) and Rave Mobile Safety.

Commenting on the appointment, Simmons Chairman and Symphony Technology Group Operating Partner John Ouren said: 'With his accomplishments as a leader and significant digital experience, this is the perfect time for Andrew Feigenson to become Simmons' CEO. Under his leadership, Simmons will continue to build on its strong relationships with leading media companies and agencies, while expanding relationships with advertisers and new media companies. We appreciate Pat's service to the company and leadership in the transition of Simmons from Experian to being an independent company in the Symphony portfolio'.