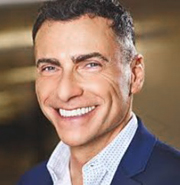 Vividata is a consortium governed by a Board of Directors representing the interests of Canadian publishers, agencies and advertisers, and providing cross-platform audience measurement for publishers. Its syndicated research uses a probability-based sample of more than 40,000 individuals collected over 52 weeks, with results released quarterly.

According to Vividata, Pellegrini's appointment completes its transition following the merger of PMB Print Management Bureau and NADBank, led by industry veteran Hill, whom it thanked for her leadership and for positioning the organization for future success. Phillip Crawley, Vice Chair of Vividata and Publisher and CEO of The Globe and Mail, comments: 'Pat brings an exceptional record of papers, presentations and awards to his credits, leading to international recognition as an expert in digital and traditional media research, audience measurement and consumer research. He is well equipped to lead Vividata to the next level. He will be an inspirational leader with widespread respect in our data-hungry industry'.
.
Web site: www.vividata.ca .


All articles 2006-21 written and edited by Mel Crowther and/or Nick Thomas unless otherwise stated.