Cultural insights and strategy consultancy Crowd DNA is opening an office in Sydney, in July. The business will be led by Elyse Pigram, who is transferring back to her native Australia after more than a year in the firm's London office. 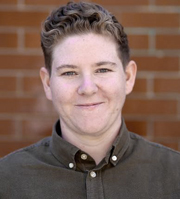 Crowd DNA conducts commercial and thought leadership research in areas such as media, fashion retail, technology and entertainment. The firm combines researchers with strategists, writers, designers and film-makers, based in offices in London, Amsterdam, New York and Singapore.

Pigram (pictured) will take over the running of the Sydney office after working in London as Strategic Insights Director. She previously served as an AD at RDSi, and earlier worked for brand development and consumer insights agency GALKAL in Australia as a Qual Account Director.

A number of clients have already commissioned projects with the new office, and the business is currently in the process of recruiting additional hires in the city. Founder Andy Crysell comments: 'We're excited to be testing ourselves in a new city. And after so much great work in our London office, where she'll be much missed, we're extremely confident Elyse is a perfect fit for taking charge of this launch - combining her understanding of Crowd DNA with fantastic industry knowledge of her native Australia'.