Mark Simon, Toluna's Managing Director for North America, is leaving the company after fourteen years to 'start a new adventure' back in the UK. Details about his next career move have not been disclosed. 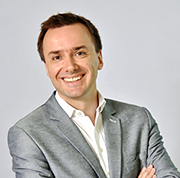 Simon (pictured) was promoted to his current role in 2013, having previously been Toluna's MD for Digital, based in its Wilton, Connecticut office. He joined the company in the UK in 2005, during the start-up phase, and served as UK MD before moving to the States nine years ago. Earlier, he worked for Greenfield Online as Client Development Director, prior to its acquisition by Toluna.

Commenting on the move, Simon said: 'It's been the professional journey of a lifetime - from a tiny start up in Paris to over 1,400 employees the world over. Emotional to leave such a passionate, talented and fun team, but I know with unwavering certainty that the future of the company is bright with the talent on board. Thanks first and foremost to Frederic-Charles Petit, who was my boss for most of that time and convinced me to set sail with him and the other loons back in 2005.'