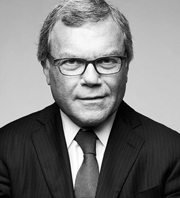 The latest financial figures include the impact of the two mergers with Progmedia in April and IMA in August, and the asset purchase of Caramel Pictures in April. Subsequent to the third quarter end, the mergers with Firewood, ConversionWorks and Datalicious Korea were completed at the end of October. The previously announced merger with BizTech is expected to be completed in early November.

Sorrell (pictured) comments: 'Our very strong organic growth of well over 40%, so far this year, indicates that clients are responding very well to our purely digital, unitary, 'holy trinity' model of first party data fueling digital content and programmatic. The mergers and asset purchase we have completed, so far this year, will broaden and deepen our capabilities and client relationships and convert clients to scale. The peanut has morphed into a pumpkin in time for Halloween 2019 and we have also achieved US$ Unicorn status'.